-Premium Artbook as released in Japan, but fully localized into English.

What is Root Letter?

Root Letter is a brand new mystery Visual Novel adventure game from Kadokawa, and is the first title in the new Kadokawa Game Mystery series! The player must find out what happened to their old penfriend, Aya, after she vanishes in mysterious circumstances. You must journey through the past as you relive prior interactions with Aya, and the present as you investigate a town and interrogate the residents in a slick adventure game style. The Rice Exclusive Pen Pal Edition comes with the game, a premium Japanese artbook, the official soundtrack, a Minoboshi Taro Giclée Print on Hahnemuhle paper, a replica letter set, and a collector's presentation box!

Set in Shimane prefecture - a place rich in history, culture and natural beauty - √Letter revolves around the mystery of Fumino Aya, your old high school pen friend who went missing 15 years ago.
On receiving her final letter 15 years late, in which she confesses to a murder, it’s up to you, the player, to unravel the mystery of what happened to her.
Reminiscing through previous letters from Fumino Aya, you must piece together the truth, alongside the testimonies from seven witnesses who knew her. Did she really murder someone, was she telling the truth in her letters – was she even real?
Please note this is the ESRB rated, NA version of the game! 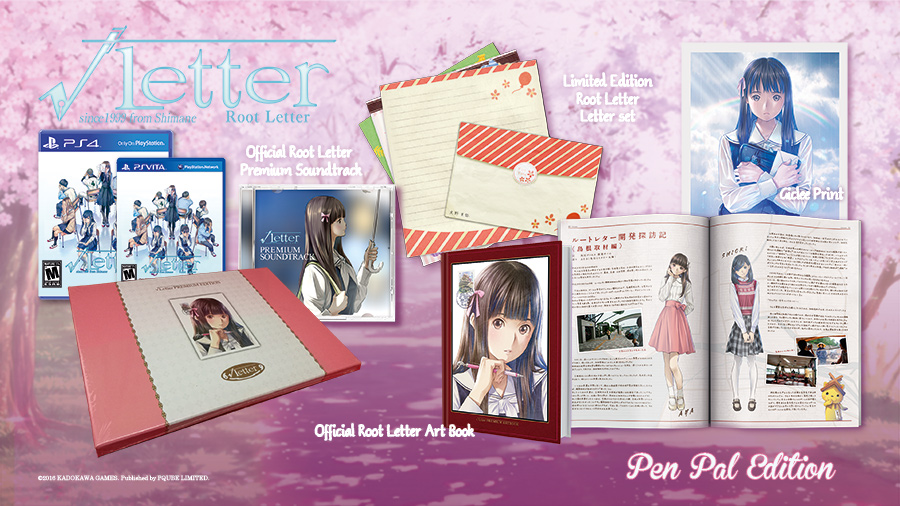 MSRP:
Now: $99.99
Was:
Inside the box: -Standard version of Root Letter -Premium Artbook as released in Japan, but fully localized into English.  -The Official Root Letter Soundtrack -Fumino Aya’s letter and...

MSRP:
Now: $74.99
Was:
New Factory Sealed Playstation Vita games are REGION FREE and will work on all vita systems from anywhere in the world. You will just be able to put this game in your system and play.

MSRP:
Now: $44.99
Was:
Habroxia [Limited Edition] for PlayStation Vita Blast your way through a myriad of extra-terrestrial incursions in this arcade-style scrolling shooter! Pilot the ship Habroxia through 15 levels...

MSRP:
Now: $49.99
Was:
Small Batch & Indie Physical Print games from LimitedRun!  All LimitedRun Games are USA Version ,Factory Sealed and Region Free! They will play on all systems world wide...

MSRP:
Now: $99.99
Was:
Inside the box: -Standard version of Root Letter -Premium Artbook as released in Japan, but fully localized into English.  -The Official Root Letter Soundtrack -Fumino Aya’s letter and...

MSRP:
Now: $159.99
Was:
RetroN 5 console 1 Bluetooth Wireless Controller 1 HD Cable 1 AC Adapter with 4 variable head sockets With the RetroN 5, you will now be able to play all of your favorite games from nine different...

MSRP:
Now: $19.99
Was:
In Rockman EXE Battlechip GP your goal is to become the champion of the Netbattler in a world rally called Battlechip Grand Prix. You can download your friend's card data through the link cable, and...

MSRP:
Now: $159.99
Was:
The ultimate HD remake: Hyperkin presents the RetroN 5, a revolutionary new way to experience classic games in high definition; the first of its kind with an all-digital HDMI output. The RetroN 5...

MSRP:
Now: $59.99
Was:
Tap into the joy of your childhood with the RetroN 3 gaming system. Capable of playing Nintendo, SEGA Genesis and Super Nintendo cartridges, the RetroN 3 is the only system you can play thousands of...

MSRP:
Now: $49.99
Was:
Play all your classic Nintendo favorites in the RetroN 2 two-in-one system! Compatible with all NES and SNES games, the RetroN 2 delivers hours of old-school fun. Comes with two wired controllers and...

MSRP:
Now: $39.99
Was:
Retro City Rampage re-imagines the open world crime genre like it's 1989. You'll jump on civilians for coins, then steal their car and outrun the law! Explore the city and complete missions, or just...