Shin Megami Tensei: Persona 2 - Innocent Sin is a turn-based Role-Playing Game (RPG) for PlayStation Portable. It is the last of the existing Japanese Persona games to be released in North America. Innocent Sin is a port of this 1999 game originally released for PlayStation that together with Persona 2: Eternal Punishment are sequels to the original game in the Persona series, Revelations: Persona. The game features addictive single player RPG gameplay, powerful "Personas" that are aspects of character's personalities manifested in magic based abilities, party based combat, random battles, a range of improvements over the original Sony gaming console release and the ability to alter the realities of the game by spreading rumors to non-player characters encountered. 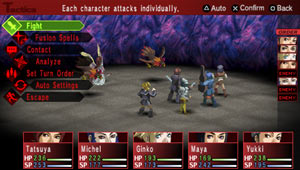 The Missing Chapter in the Persona Series

Over 12 years in the making, the official localization of Innocent Sin provides patient fans with the other side of the Persona 2 arc, a dark adventure about high school students who find their reality being twisted by rumors, and who must draw on their inner strengths, their Personas, to bring back order. Taking advantage of PSP system's 16:9 aspect ratio, higher resolution display, superior audio, and increased horsepower, this remastered version of one of the pinnacles of Atlus' flagship Shin Megami Tensei franchise delivers a sleek new interface, new side quests in the Climax Theater and the player's choice of the fully remixed or original soundtrack.

MSRP:
Now: $49.99
Was:
Description: Persona 4: Dancing All Night is a story-driven music game of the cult hit RPG Persona 4, developed by ATLUS. Replacing the RPG elements are dance battles that challenge players'...

MSRP:
Now: $59.99
Was:
Persona 5 Royal: Steelbook Launch Edition - PlayStation 4 Prepare for an all-new RPG experience in Persona 5 Royal based in the universe of the award-winning series, Persona! Don the mask of Joker...

MSRP:
Now: $79.99
Was:
Shin Megami Tensei IV - Limited Edition - (Nintendo 3DS) Description: In 1492, the Eastern Kingdom of Mikado is protected by high walls, with the castle and its king at the center. A young warrior,...

MSRP:
Now: $39.99
Was:
Ghost Blade for Sega Dreamcast Ghost Blade is an intense bullet-hell shoot 'em up game, with satisfying and addictive score-based gameplay, with its tradition going back to the shooting games of the...

MSRP:
Now: $39.99
Was:
Ganryu for Sega Dreamcast After defeating Kojiro, his lifelong enemy, Musashi decides to join his beloved in Kyoto. However, the city is attacked by ninjas of unknown origin and have kidnapped Otsu...

MSRP:
Now: $39.99
Was:
BREAKERS for Sega Dreamcast Breakers is a competitive fighting game developed by Visco, which was released for the Neo Geo coin-operated platform on December 17, 1996 is now becoming available for...

Not seeing what you want? We have much more more in-store!  Feel free to contact us with any requests: PHONE: (212)539-1039 EMAIL: videogamesnewyork@gmail.com

MSRP:
Now: $19.99
Was:
Its time to take you favorite retro gaming consoles to your fancy HD TV! This Old Skool converter will upscale your older video output into a high-def signal, up to 1080p@60fps!! This is also the...

MSRP:
Now: $29.99
Was:
Alice's Mom's Rescue for Sega Dreamcast  DESCRIPTION: Help intrepid Alice rescue her mother! A giant crow took Alice's mother! Go to rescue her as quickly as possible in a wonderful...

MSRP:
Now: $49.99
Was:
About the product Players earn points to clear each stage of the game by tapping along with whimsical graphics and orchestrated music Multiple modes of play - Try your skills in friendly...